Padre Pio of Pietrelcina is an ordinary man, a sage, and a mystic at the same time. Hidden love for Jesus made him similar to Jesus, the result of which was stigmata on the body and unusual soul gifts. 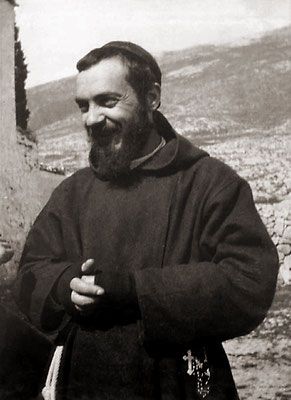 Francesco Forgione was born in Pietrelcina in southern Italy on 25 May 1887. His mother, Peppa, said that he was unlike other boys. “He was never rude, he never misbehaved.” He was an extraordinary child. From the age of five, he had visions of Heaven. At the age of 12, he received the sacraments – Holy Communion and Confirmation.

His life was rather ascetic. As a result of mortification and poor health, he was close to death. At some point in his life, he decided to join the Capuchin and start his novitiate – and with it an intense life of study and spirituality. He took the name of Pio of Petrelcina.

In 1910, he was ordained a priest in the Cathedral of Benevento. In July 1916, Padre Pio was sent to the monastery in San Giovanni Rotondo and remained there until his death.

Padre Pio received stigmata on his hands on 20 September 1918, when he was praying before the cross placed in the choir of an old church. Stigmata wounds remained open and bleeding for fifty years. Just before he died, they disappeared. For this reason, many people, doctors, scientists, journalists, photographers, and ordinary people would come to San Giovanni Rotondo to see this “extraordinary brother”. 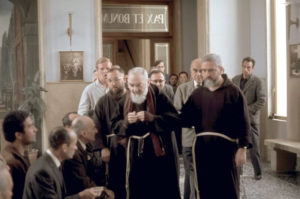 He said about stigmata: “What can I say about my crucifixion? My God! What a shame and humiliation I feel when I try to tell someone what you have done to me, your miserable creature! It happened the morning of 20th (September) – I was in the choir, after the celebration of Holy Mass, when suddenly I was engulfed with blissful peace of mind resembling a nice dream. All the senses of my soul, internal and external, were in a state of unspeakable peace. Inside and around me there was a deep silence, deep peace took over and then, suddenly, I felt a complete detachment from everything. When this happened, I was a shadowy figure, similar to the one I had seen on the 5th of August. The only difference was that blood dripped from His hands, feet, and side. This sight frightened me: I cannot describe what I felt at that moment. I thought I was going to die, and I would if it wasn’t for the Lord, who intervened and held my heart, which nearly blew up my chest. The phenomenon passed and I realized that my hands, feet, and side were pierced and oozed blood. You can imagine the agony I felt and fell almost every day. The heart wound bleeds constantly, especially from Thursday evening to Saturday. My God, I’m dying of pain, suffering, and shame I feel in the depths of my soul. I am afraid that I will bleed to death! I hope that God will hear my moans and take this thing away.” 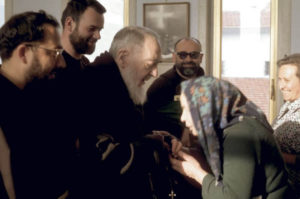 For many years, he experienced spiritual suffering, and he endured the pain with amazing serenity. He accepted many observations of his superiors in silence and was always calm in the face of slander. When he was to be tested and restricted in his pastoral ministry, he accepted it with profound humility and submission. He was always silent in the face of unjust accusations and slander.

On May 23 and June 17 of 1923, the Congregation of the Holy Office restricted Padre Pio’s contacts with people. But at the end of June, at the request of the people, was able to again celebrate Holy Mass. Unfortunately, again in 1931, he was banned from exercising priestly functions except for private Holy Masses. The right to shrive and celebrate Holy Mass was restored in 1933.
On May 5, 1956, Padre Pio opened a hospital that he named Home to Relieve Suffering (during a conversation with Padre Pio in Kraków, he said to me: “If I could, I would destroy this hospital. Only the children of important political figures are treated there, but it was supposed to be for the poor.”)

On 20 February 197, Pope Paul VI, when speaking to the Superiors of the Capuchin Order, said of him: “Look what fame he had, how many people are united around him! But why? Maybe he was a philosopher? Maybe he was wise? Maybe he had some means to use? Because he celebrated Holy Mass humbly, heard confessions from dawn to dusk and was, although it’s hard to say out loud, marked with the stigmata of our Lord Jesus Christ. He was a man of prayer and suffering.”

On May 2, 199, during the solemn Eucharistic Concelebration in the square of St. Peter in Rome, Pope John Paul II, by apostolic authority, announced the Blessed Servant of God Pio of Pietrelcina, setting his liturgical memorial on 23 September. Padre Pio was canonized on 16 June 2002, at the St. Peter square in Rome. 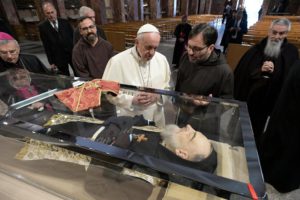 The smell of Padre Pio – this phenomenon allowed everyone to feel the presence of Padre Pio through his characteristic scent (scent of violets – I experienced it many times). This scent was coming from his body, clothes, or other objects that he touched. Sometimes, it was present in different places, also in different countries. This also happens today, after the death of Padre Pio. The scent as a sign that he is nearby.

With this unique ability, Padre Pio was able to look inside the human soul. In particular, this gift revealed itself during confession. During the conversations with Padre Pio through Krystyna in Kraków, he knew everything about us. He personally revealed the mysteries of our lives. To me as well. He told me about my future, how it will look like. So far, everything has fulfilled itself. I could describe different events when Padre Pio predicted what was about to happen. I heard it directly from Him. Everything turned out to be true.

Padre Pio hears prayers, he is a great mediator.

Prayers were particularly effective when Padre Pio was alive. But also after his death. When he appeared in Nowa Huta, people asked him for different favours. And they happened. Krystyna told me that Padre ordered her to go to Przemyśl. Group conversations took place there. He answered questions and healed some people on the spot. After Krystyna’s death and the end of conversations that took place for nearly 50 years, both during the life of Padre Pio and after his death, people praying for his intercession experience many graces. 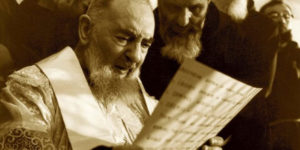 One of the mysterious gifts of Padre Pio was the gift of bilocation. He could be physically present in one place, but his presence would also be felt in another place. There is evidence that Padre Pio never left San Giovanni Rotondo since leaving the army in 1916, and yet he was seen in many places in the world, even in California. I asked Padre Pio about this personally. He said that “the soul is able to split itself”. Padre Pio could be seen in 5 locations at the same time.

Blessed Don Orione spoke about Padre Pio’s bilocation ability. He said: “I was in the church of St. Peter in Rome to attend the beatification ceremony of St. Teresa. Padre Pio was there as well, even though, at the same time he was in his monastery. I saw him. He smiled through the crowd and approached in my direction. However, when he was close to me, he disappeared.”

What official sources do not tell?

Of course, the knowledge passed by Padre Pio in Nowa Huta is different than the knowledge contained in thousands of books about him. This these books, nothing came to light, they contain no knowledge from Heaven. These are ordinary church books. I read almost all about Padre Pio to find something from the higher spheres. Nothing. A huge difference. But Padre Pio was able to adapt to the awareness of the conversation partner in Nowa Huta. When he saw that the person was not able to understand more, he never talked about the new-old Heavenly knowledge. Everything stayed the old, church-like way. The vast majority of people talking to Padre Pio knew nothing. He respected the ignorance of others. He descended to their intellectual level. Church’s publications after the death and during the life of Padre Pio are only a tiny ray of knowledge. To the church, the mission of Padre Pio and his real identity remain a mystery. As well as his heirs, who have received the knowledge from beyond.

Another unusual fact is that Padre Pio had not let anyone photograph him for 50 years. Different people came to Padre Pio to take photos with him. Unfortunately, photos were distorted. Which is why there are no photos of young Padre Pio, except for a few. 50 years of photographic and film emptiness. People began to insist on his superiors to speak to Padre Pio. But he firmly denied. A noble trick was used. He was ordered, bound by the vow of obedience, to be photographed. Padre Pio fulfilled the will of His superiors. Since then, the photos were good. We can view them and enjoy them.

I have developed the biography of Padre Pio based on historical facts and my own experiences related to the conversations near Kraków. I was talking to Padre Pio for 35 years. There were periods that I could participate in these conversations every day. Padre encouraged me to. He said that the time would come that there would be no conversations. 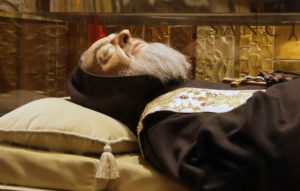